New Zealanders have long had a strange relationship with drinking. Lately we’ve seen stories wondering why alcohol was essential, and others warning to mind one’s own business. I noticed my own drinking patterns increasing during Level 4, and typically bought several bottles of wine at a shop. One one occasion I joked to the checkout operator that I was saving another three incidental shopping trips, before having a moment of clarity that probably everyone said that. On asking her tired response confirmed it: my joke was not new and we’re drinking more in lockdown.

Recipes for and jokes about #quarantini, the sight of bare shelves and the stories above reminded me of a brilliant blog I read in Atlas Obscura years ago, where the writer, as the title says “Tried a Medieval Diet, and I Didn’t Even Get That Drunk“. We think of medieval people as rolling around drunk, given their dislike of water, but as Sarah says, “I never managed to drink quite the volume of wine that medieval people are reputed to, but I’m now convinced that most people were not drunk-drunk, just pleasantly buzzed. Considering the percentage of America’s population that’s regularly taking some mood-enhancing drug, we shouldn’t judge medieval people too harshly“

In New Zealand, our heavy drinking is often attributed to the infamous 6o’clock swill, when opening hours was restricted to a 6pm close. Unsurprisingly, beer-loving people (men) crowded into pubs to drink as much as they could between the end of work and the closing of the pubs. From 1918 to 1967, people chugged back as much and as fast as they could.

At the same time, the Temperance movement was gaining traction in New Zealand. in 1932 Temperance societies in Auckland started planning for a centenary celebration, whilst the 6-o’clock swill raged on and housewives were sneaking ‘drinko’ into their husbands food or drink to try curb the drinking. The adverts are rather quaint, and a little ethically dubious.

Other adverts include alcohol alternatives, such as Kola-nip, which looks to be a tonic/ sparkling drink that was also available in Australia:

I am far from a wowser, and my first proper job out of university was with Hospitality New Zealand, so my professional roots are a little more towards individual responsibility than for a complete ban on alcohol (hello, South Africa). But I can’t help but wonder if we’ve risked the livelihoods of an enormous number of people during level 3 and 4, and if maybe (maybe) Australia did it better. I reached out to my former boss and (former) CEO of Hospitality New Zealand Bruce Roberston, asking what he thought, and it was dire: businesses were in trouble and he expected 30 to 40% of businesses to fail in the next 6 months.

It’s a scary time in more ways than one, but if we want to see our economy pull through, here’s my advice: Head out for dinner. Stick to the three S’s. Be kind. We’re all scared and bewildered, and maybe our Medieval ancestors had something right: a bit of a drink eases anxiety, and watered down wine (really) is delicious and less harmful than straight.

What the heck is a peck?

How many peppers did Peter Piper pick?

So goes the old tongue twister. But have you ever asked what the heck is a peck?

It’s not the strike of a bird or a quick kiss, but a measure whose meaning has become extinct as language and measurement systems have evolved. Historically, a peck was a measure of dry goods, “particularly as a measure of oats for horses“. It stems from Anglo-Norman French and came into Middle English, from around 1350. We have scattered historic measurements that don’t match up with our modern understanding throughout English: gills, drams, and bushels are just some of them. And it turns out that history has a really entertaining system of measurements and weights.

I found a table of conversions for weight, length and measures in my copy of Modern Domestic Cookery (1880) inherited through my Nana from my great-Grandmother. The ever-precise Victorians had a complex system of measurements that I feel – for entertainment’s sake – should be fully reproduced and interpreted here:

You can see my conversions into metric in the square brackets as I struggled to make sense of just what the pounds meant in my understanding. And while saying that 28 pounds is 12.7 kilos is all well and good, it doesn’t really explain much. But to solve the mystery of what a peck is, we need to get a little more murky: as a peck isn’t even a measurement of weight, but a measure of capacity. So: 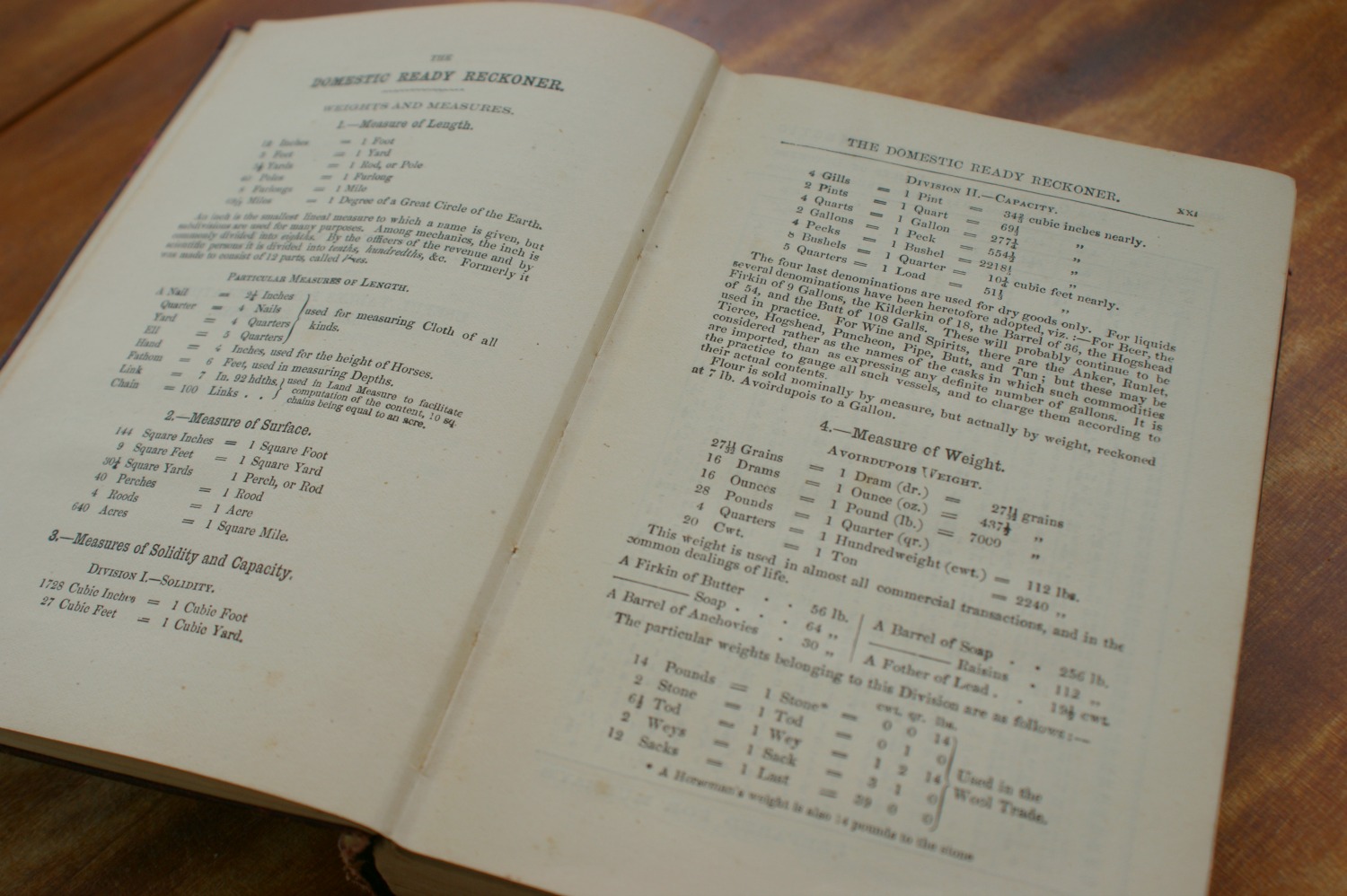 Modern Domestic Cookery’s ‘Domestic Ready Reckoner’: all the conversions you could want, including what a peck is.

So at last, we have an understanding of what a peck is. But rather than being able to say that a peck is approximately x kilos, we’re still left with a rather vague notion of how big it is. Essentially, it’s 2 gallons’ worth of peppers. A gallon (for those who – like me – live outside of the US) – is 3.78 litres. And as luck should have it, I have a butt-load of jalapeño peppers from an unseasonably warm summer that I can measure.

I have a 4L capacity pot, and by filling it with 3.78L of water and marking it, I got my gallon’s measure. And the answer to the great question?

Around 204. As I was picking, packing and triple counting, it was obvious that peppers are variable in size and shape, and that your mode of packing will determine how many you can fit in: you’ll probably never get the same number in any one peck. Which is why the complete answer to the tongue twister of ‘how many peppers?’ will probably always be a partial mystery.

Funnily enough, this mystery is probably the answer to why we abandoned such measurement systems as well. Who needs pecks and bushels when you’ve got much more sensible systems, like metric?

We pickled the peppers in a solution of vinegar, honey and bourbon, spiced with coriander and mustard seeds, with bay leaves.

* I have a friend who recalls the tongue twister as Peter Piper picked a peck of pickled peppers, which implies to me that he went into a shop a picked up a peck-sized jar of peppers, rather than picking them off a bush. I’d be interested to hear what other versions people know.

1. Yes, you read that right, 27, one-third and a half grains. I’ll let your mind boggle over that level of precision for a moment.

2. Clearly, this is not the same as a dram of whiskey.

3. Pity the poor soul who decided to count the number of grains in a pound.

4. Yes, five ‘quarters’ equals a whole load. What you learned in school is nothing.

Soufflé. They have a reputation of being tricky, but I’ve always wanted to make one. So when Eaten Magazine issued the Cooking for Victory Challenge, and I decided there was no time like lockdown time to tackle the beast. That, and we have a HUGE patch of silverbeet and spinach in the garden that needed eating. Cooking for Victory and its WWII predecessor Dig for Victory just collided in my kitchen.

The resultof my first attempt was undoubtedly a soufflop.

Not one to give up, I made soufflé the next day for lunch, in a smaller dish, and with some wooden cutlery underneath the bowl in the waterbath to reduce rocking while cooking. I got an airy soufflé that still didn’t rise above the dishes lip, but was a very tasty lunch:

As my faithful little electric beater was whisking up the eggs for my second attempt, I couldn’t help but think that this would have been hell without an electric beater. Hand-powered beaters and mixers were invented and patented in the 1850s by several individuals, and the first powered mixer was invented in 1885, with Sunbeam and KitchenAid coming to the party in the 1910s. Appliances in domestic households were not common until the 1920s in America, and as late as 1935 in Britain 1/3 of new homes were wired for lighting only, leading to “octopus wiring” in the kitchen as people sought to power their new appliances (‘Dawn of the Electronic Age’, pages 230 on). Given that the Victory Cook Book was published in 1943, it’s probable that some American housewives had an electric mixer, but for those without, making a souffle would have been plain awful, if not completely off the menu.

Savoury soufflé’s are made with richer and heavier ingredients, so don’t rise as high as their sweet counterparts. And while I avoided dusting my buttered dishes with parmesan or breadcrumbs for my first two tries (not included in the recipe…), apparently a bit of grit on the sides helps the soufflé to climb. And so, on to attempt three with ramekins, lemon juice in the egg white to further trap air, dusted edges, and lower expectations of a sky-scraping lift:

And guys, I exceeded my expectations completely. They might not have that classic smooth soufflé top but I like how rustic and muffin-like they look. I also added a hefty pinch of chilli flakes as well, because cheese = good, spinach = good, egg = good, and chilli = better. The serving portion for 3 is probably more reflective of the smaller serving sizes people used to eat, and of stretching what you had to feed as many as possible during the war. It fed us both very well as a light lunch, or as an entrée to a small dinner. It’s a great way to add to your meal with only a few ingredients, and it really is a very tasty meal too. And I’ll call that a souf-cess.